3 police officers were injured in a stabbing in Jerusalem. The Palestinian attacker was shot dead

Three police officers were wounded in a stabbing and a suspected Palestinian attacker was shot dead in Jerusalem’s Old City on Thursday morning, officials said.

According to police, officers spotted the man acting suspiciously at the entrance to the Temple Mount Iron Gate and began questioning him.

“During the examination of the suspect, he took out a knife and stabbed one of the police officers in the upper part of his body,” the police said.

Two other officers opened fire on the attacker, later identified as 20-year-old Bader Amer of East Jerusalem’s Beit Hanina neighborhood, and he was pronounced dead at the scene a short time later.

In addition to the policeman who was stabbed, one officer was injured when he fired so-called friendly fire as his colleagues opened fire on the attacker.

The two officers, ages 30 and 25, were taken to Shaare Zedek Hospital in good to moderate condition, medical officials said.

A third officer, who was slightly injured in the incident – it was not immediately known how – was taken to Hadassah Mount Scopus Hospital, police and medics said. 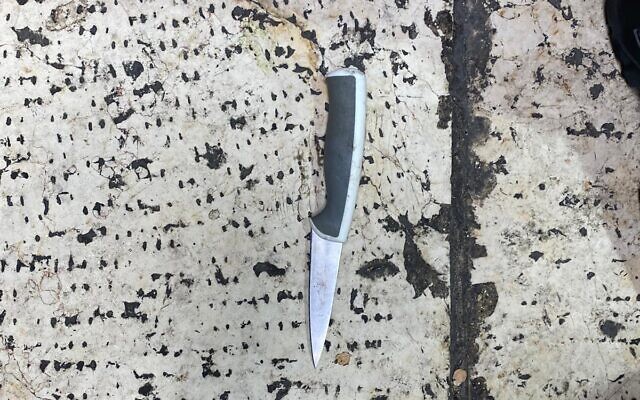 A knife used in a stabbing in Jerusalem’s Old City on November 3, 2022 (Israel Police)

The area was cordoned off as Jerusalem District Police Chief Doron Turgeman conducted an on-scene assessment.

The stabbing followed several attacks by Palestinians against Israeli civilians and security forces in recent days.

Wednesday was an IDF officer be seriously injured A vehicle was attacked at a West Bank checkpoint east of the Israeli city of Modi and near the settlement of Beit Horon on the Jordan River. The Palestinian attacker was shot.

SundayA Palestinian driver rammed his car into Israeli soldiers in two neighborhoods south of the West Bank city of Jericho, wounding five of them, before being shot dead.

In terrorist attack on Saturday, an Israeli was shot in Hebron. The terrorist was run over by a security guard and killed an off-duty soldier.