Far-right leader Bezalel Smotrich said Sunday that Israel’s Shin Bet security service bears some of the blame for the 1995 assassination of Prime Minister Yitzhak Rabin, claiming it used “manipulation” that encouraged the right-wing extremist to commit the murder. plan

The remarks came at an official memorial service in the Knesset, marking 27 years since Rabin’s assassination by Yigal Amir, who opposed the prime minister’s vision of peace in exchange for territorial concessions with the Palestinians.

The session also saw opposition leader Benjamin Netanyahu, presumed prime minister after winning last week’s election, strike a rare tone of reconciliation, while Defense Minister Benny Gantz compared the incitement before Rabin’s killing to chants directed at him in the run-up to the vote. , allegedly motivated by right-wing election propaganda against him.

Smotrich said he tried to speak at the event to ask: He argued that the killing had spawned a “blame factory that, even 27 years later, continues to produce more and more accusations against more than half of the country, which is held responsible for the murder committed by the vile murderer Yigal Amir.”

Smotrich argued that objections to Rabin’s policies at the time were “of the essence of democracy” and did not incite and play no role in the assassination.

“It is permissible to complain, shout and say rude words, and not every harsh word is an incitement,” he said. “The prime minister’s murder was caused by his cruel words. In Yigal Amir, it was a mean assassin.

“Those who failed to protect Prime Minister Yitzhak Rabin,” continued Smotrich, “were not the right-wing and religious Zionists and settlers who rightly condemned his government’s policies, but the security services, which not only failed to protect him. , but also used irresponsible manipulations that have not been fully revealed to this day to encourage the killer to carry out his plan.” 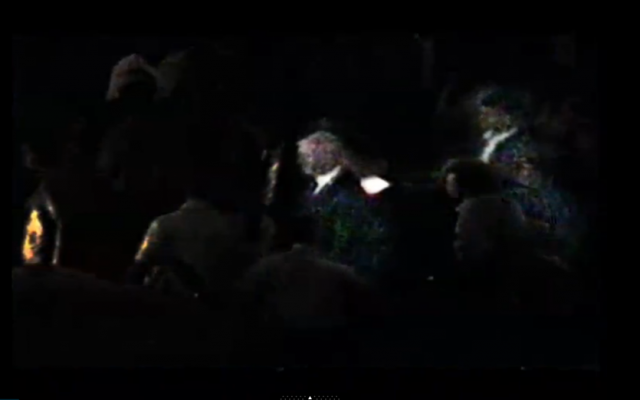 Shots fired as Yigal Amir shoots Yitzhak Rabin in the back, November 4, 1995. (screenshot of channel 2)

Smotrich’s remarks referred to Shin Bet agent provocateur Avishai Raviv, codenamed “Champagne”, who had joined the ranks of far-right extremists before Rabin’s murder and was accused, and later acquitted, of allegedly knowing about Amir’s intention to kill Rabin and failing to prevent it. .

Smotrich did not elaborate on that claim and went on to argue that the anniversary of the assassination has become an annual right-left battleground, “which distracts us from the main purpose of this day, to remember together, to educate our children, everyone, about the limits of democracy.

“I stand here before you, the Rabin family, the members of the Rabin Center, I extend my hand and ask after 27 years: Please allow us to partner on this day. Let’s look for the common message that will make us remember together, the whole nation, right and left, religious and secular. Don’t let the assassination memorial be turned into a day of cynical exploitation and political mudslinging.”

Smotrich’s remark about the Shin Bet was met with jeers from lawmakers in the plenum and reprimands from unidentified Shin Bet sources who expressed “shock” at the comments.

“On this day of all days, an elected official has decided to promote conspiracy theories and defame an organization whose sole purpose is to prevent any form of terrorism and protect the security of the state,” the sources said. “Such expressions that encourage extremist discourse must be condemned.” 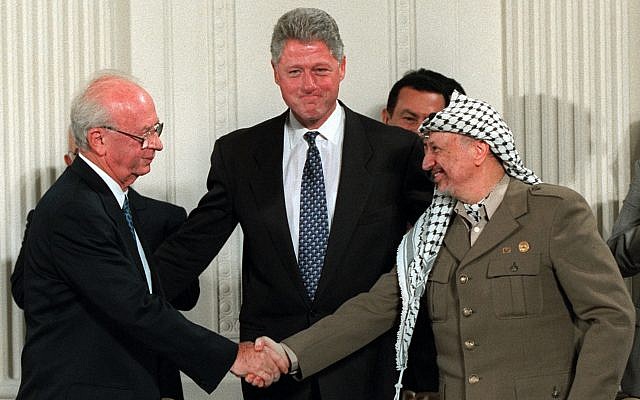 Netanyahu, who is set to become prime minister again this month after his religious-right bloc won a majority in last week’s election, struck an incongruously conciliatory tone in his own memorial speech, urging Israel’s ideological rivals to come together and focus on “the greatest.” we agree” echoing the sentiments voiced earlier by Prime Minister Yair Lapid and President Isaac Herzog.

Netanyahu called Rabin’s killing “a horrific, sickening and violent act that is an attack on democracy.”

“Yitzhak Rabin was a patriot with many virtues in the history of the country. He loved the country, fought for Israel, represented it all over the world and was elected head of the state of Israel,” he continued.

“After the elections are over, we have to get out of the trenches and find out how to work together,” Netanyahu said.

“Differences won’t disappear, and that’s okay. We have deep disagreements on several topics, which should be managed responsibly and thoughtfully,” he said. “It’s okay to argue, we don’t need to agree on everything, but at the same time we need to know what we agree on, what most of us agree on.” 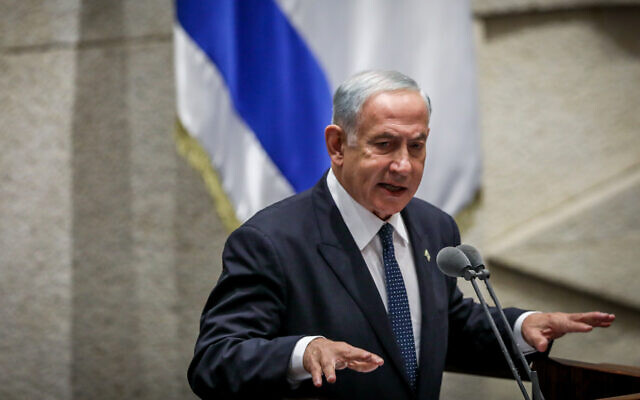 Opposition Leader Benjamin Netanyahu speaks during a special plenary session marking the 27th anniversary of the assassination of Prime Minister Yitzhak Rabin in the Knesset on November 6, 2022. (Noam Revkin Fenton/Flash90)

Netanyahu said the ideas that enjoy broad consensus in the country include Israel as the nation-state of the Jewish people, the right of every Jew to immigrate to Israel and the need to fight “terrorism without compromise,” as he promised his incoming government would. crush the current, months-long wave of Palestinian attacks.

He also asserted that there was broad agreement that Israel should maintain security control over all of the territory west of the Jordan River, that Jerusalem should remain the unified capital of Israel under Israeli sovereignty, and that peace should be achieved with more and more Arab countries. :

“First of all, we achieve peace with the Arab domain, and then the Palestinians will come to their senses. [and agree] on a deal we can live with,” Netanyahu said. “Wherever possible, we must seek agreement, unity and mutual solidarity to secure Israel’s future.”

The speech came after the right-wing Netanyahu spent the past year and a half repeatedly criticizing his center-left and right-wing rivals for forming the government that replaced him after 12 consecutive years as prime minister. Netanyahu ran a fiercely oppositional campaign, avoiding any positive remarks about the government’s conduct and refusing to support legislation it proposed, even when the issue aligned with his party’s ideology.

In his own speech, outgoing Prime Minister Lapid said Rabin believes Israel’s power is built on four pillars: the rule of law, the country’s alignment with the “technologically advanced West,” democracy and the pursuit of peace.

“If Israel abandons the rule of law, dismantles its democracy, reverses progress and our ties with the international community, and completely abandons the desire for peace, it will be a weaker country and Rabin’s ideas will be buried next to it,” he said.

“We won’t let that happen.” 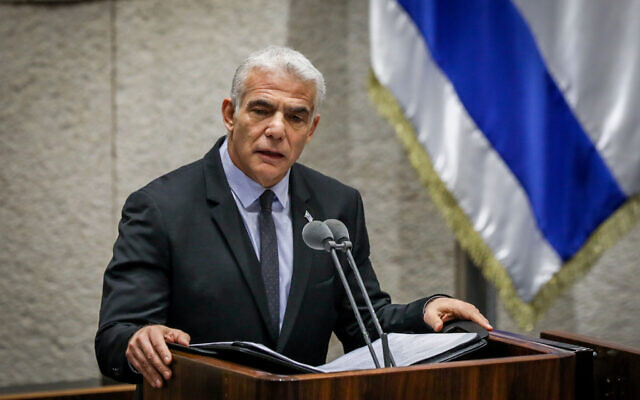 Prime Minister Yair Lapid speaks in the Knesset Plenum Hall during a commemoration of the 27th anniversary of the assassination of former Prime Minister Yitzhak Rabin on November 6, 2022 in Jerusalem. (Noam Revkin Fenton/Flash90)

“Rabbi fought for Jerusalem [as a commander in the Jewish underground] In the War of Independence, he commanded the Israel Defense Forces in the Six Day War [as chief of staff], he went to the prime minister, from there he went to the opposition, and then he returned to the prime minister, because he knew that he had to fight anew every day for his ideas and beliefs,” said Lapid. “It is not easy. The real test is not success, but failure.”

“Rabbi taught us, both in life and in death… that a man is judged by how he is ready to go [with their beliefs] all the way, all the way with what you think is right,” he added.

“I stand here as the Prime Minister of Israel and I say from here. After the murder, even after everything that happened after the murder, this is not the end. Yitzhak Rabin is no more. His ideas live with us.”

Lapid also appeared during his speech to hit out at popular far-right MK Itamar Ben Gvir, a close ally of Smotrich, who has been filmed several times in recent months waving guns at Arab and Palestinian civilians during clashes.

“Power doesn’t come from hitting guns,” Lapid said. “It is the weapon of cowards, lawbreakers, and it was the weapon. [Rabin’s assassin] Yigal Amir.” 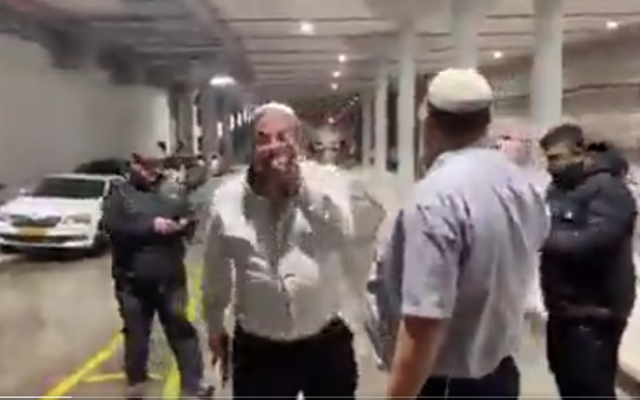 A screen capture from a video of MK Itamar Ben Gvir holding a gun in his right hand during an altercation with Arab security officers at the Expo Tel Aviv conference center on December 21, 2021. (Twitter)

Retired Defense Minister Benny Gantz made a fiery speech at the session, recalling what he was like. He called himself a “murderer” while visiting the Western Wall the night before last week’s election.

“I got a little reminder of the inextricable link between words and actions,” he said. “It’s no secret that every time I go to the Western Wall, I put the same note with the same words, wishing for peace between us and between us.

“I made the mistake of posting a note on the Western Wall on the eve of the election, and suddenly found myself a mere footnote in history compared to Rabin, but with the same years of service and dedication, who was hailed by a group; with the terrible screams of people. “Murderer”.

“They were the exact same chants, and this is 27 years later,” Gantz said, referring to the chants often used at right-wing rallies in 1995 that called Rabin a murderer before he was killed. “Let’s not think about what led to that terrible night… but rather what, God forbid, might lead to the next night. And I tell you that there is a connection between words and actions on the edge. 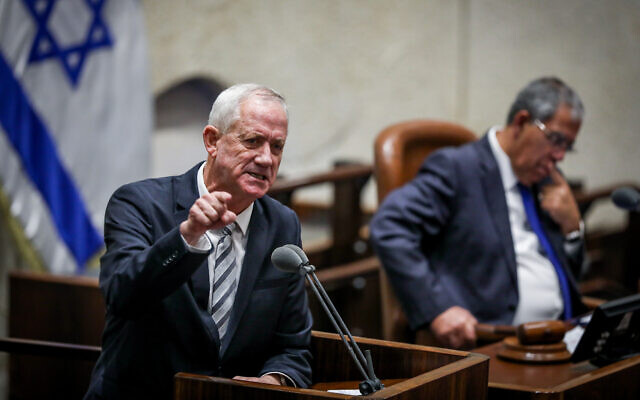 Defense Minister Benny Gantz speaks during a special plenum marking the 27th anniversary of the assassination of Prime Minister Yitzhak Rabin in the Knesset on November 6, 2022. (Noam Revkin Fenton/Flash90)

Before the election, Gantz accused Netanyahu of being a “liar” who “can’t say one true word” after Netanyahu accused Gantz of “endangering…soldiers’ lives to avoid harming the Palestinians” when he served as leader. Israel Defense Forces personnel.

In his speech on Sunday, Gantz said he was “sure that my friends don’t want anyone to hurt me, and I’m not afraid of that, but I’m worried because words lead to action.

“I will do everything to establish peace between us. I do not dispute the results of the election, I accept the will of the voter, but please look 27 years into the future and see how things can go down, because when they go, there will not be a force that can; stop it.”

Smotrich replied to Gantz saying: “Obviously, your words come from the heart. The footage from the Western Wall also shocked me.”