Herzog. As the Middle East faces a climate disaster, Israel is ready to step up to help

SHARM EL-SHEIKH, Egypt. The Middle East is on the brink of climate disaster, but Israel is ready to lead efforts toward climate stability in the region, President Isaac Herzog told world leaders at the UN COP27 climate conference in the resort town of Egypt. Sharm El Sheikh Monday.

“With studies predicting imminent, severe consequences for our region, the Middle East is on the brink of disaster,” he said in his speech, referring to the fact that the Middle East and North Africa are warming twice as fast as the global average.

“Here in Sharm el-Sheikh, I want to reiterate the strong commitment of the State of Israel to achieve net zero carbon emissions and transition from fossil fuels to renewable energy by 2050. But Israel is ready to take on more responsibility. Israel stands ready to lead efforts toward regional climate stability. I intend to lead what I call a regenerating Middle East, a regional ecosystem for sustainable peace.”

A year ago, at COP26 in Glasgow, Scotland, then Prime Minister Naftali Bennett has verbally promised that Israel will be zero by 2050but the commitment was never anchored by law or even by government decree.

Net zero refers to a situation where a country reduces its emissions as much as possible and offsets what it still needs to emit. This can be done by investing in projects that reduce emissions or capture (absorb) carbon dioxide from the air and either use it in industry or convert it into a form that can be buried for a long time.

Herzog invited everyone at the conference to visit Israel’s first-ever booth at a COP event, which he has been opened earlier Monday and said he envisions solar energy produced in Middle Eastern deserts being exported to Europe, Asia and Africa in the “foreseeable future.” 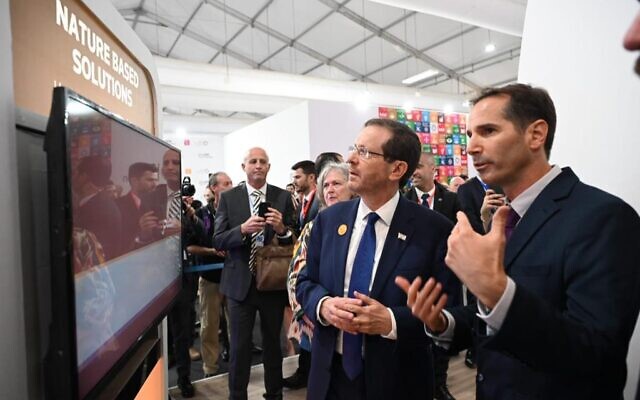 “I believe that all the countries in the Middle East, which are abundant with sun and technology, will have the opportunity to connect the rest of the world with a great source of renewable energy,” he said.

“In a region facing accelerated desertification, Israel also has the capacity and know-how to address severe water shortages and provide solutions to food insecurity. We want to share all our experience and practical tools. This is what a recovering Middle East looks like.”

He continued. “This emergency requires us to work together. Not tomorrow, today. Let’s turn the climate emergency into an opportunity to address 20th century conflicts, thereby advancing much-needed 21st century collaborations. Let’s use vital regional partnerships as a path to inclusiveness, stability and prosperity to shape this shared, regenerative Middle East.”

Herzog quoted a A deal brokered by the United Arab Emirates For Jordan to supply solar power to Israel and Israel to provide desalinated water to the Hashemite Kingdom as “the ultimate example of a creative, beneficial and win-win partnership that will contribute to the stability of the entire region.” 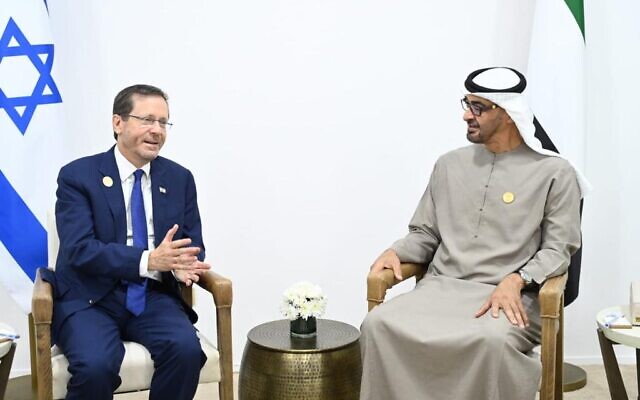 It is understood that an updated memorandum of understanding will be signed during the COP conference.

Herzog ended his speech with “the spirit of our hosts in the region,” switching to Arabic to quote the Koran’s injunction to “be kind to others as Allah has been kind to us and not seek to corrupt the earth.” Returning to English, he quoted God’s commandment in the Bible to “work, work, and protect the earth.”

He concluded. “Let’s save the world that God has given us, for we are all made in his image.”