SHARM EL-SHEIKH, Egypt. Israel’s environment minister attended a regional meeting with Iraqi and Lebanese leaders at the global climate conference in Egypt on Tuesday, where the group pledged to work together to fight climate change.

Israel is still officially at war with Lebanon, and Israel and Iraq have no diplomatic relations and no history of hostilities.

While Lebanon and Israel recently signed a US-brokered maritime accord, any hint that the two countries are open to cooperation even as part of a regional situation would be meaningful. Lebanon bans its citizens from having any contact with Israelis, and the maritime deal was negotiated through American shuttle diplomacy, with no Israeli or Lebanese officials meeting publicly.

The leaders and politicians of the countries of the Eastern Mediterranean and the Middle East (EMME) participated in the meeting.

It concluded a three-year regional process initiated by the Cypriot government, which involved meetings of officials, then ministers and finally heads of state.

A joint regional discussion on the climate crisis for member states led by the presidents of Egypt and Cyprus and with the participation of Greece, Jordan, Iraq, Lebanon, the Palestinian Authority, Bahrain and Oman. We, the countries of the region, share the desert, sea, warming and drying. If we share problems, we can and must share solutions pic.twitter.com/pCv8GE7dZd

Photos provided by his office show him sitting behind a small Israeli flag. Two seats away from him is Iraqi President Abdul Latif Rashid, and on the other side of the room is Lebanese Prime Minister Najib Mikati, each behind their countries’ flags.

Mikati’s office downplayed the incident, saying it had been exaggerated in the Israeli media. 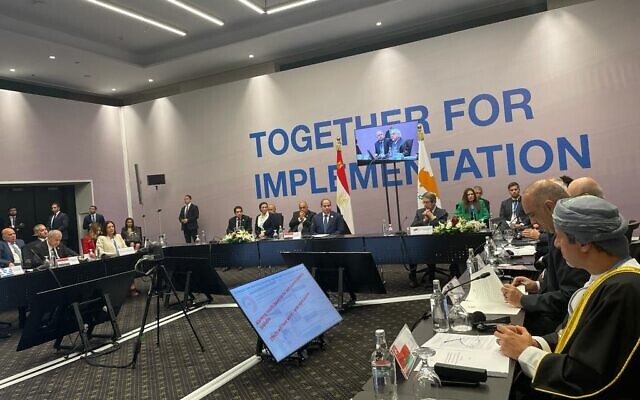 The meeting was convened by the presidents of Egypt and Cyprus and was attended by a large number of Arab and international officials, like other climate change conference meetings. “There was no contact with any Israeli official,” the statement said.

The initiative, coordinated by the Cyprus Institute, a non-profit research and education institution, collects regional scientific climate data on which to base regional policy. Multinational working groups consisting of around 220 scientists, 12 of them from Israel, mapped the effects of climate change in the region, identified where action is needed and formulated a Comprehensive Scientific Report. It focuses on 13 disciplines, ranging from energy, the built environment, agroforestry and the food chain to the marine environment, education, migration and tourism.

Recommendations are for action at both the state and regional levels.

In the agreement signed on Tuesday, the participants pledged to “act systematically on mitigation (reduction of carbon emissions) and adaptation, strengthen regional cooperation through partnerships, communication, cooperation and exchange of good practices and key (agenda) environmental, climate mitigation and adaptation policies and services in all sectors”. :

The signatories committed to meet again and take stock after four years.

Israel was represented by outgoing Environmental Protection Secretary Tamar Zandberg, who said: “Countries in the region share a warming and drying climate, and just as they share problems, they can and should share solutions. No country will be able to face the climate crisis alone, and the joint efforts of countries in the region to share preparedness and adaptation solutions are of the utmost importance for the coming years.” 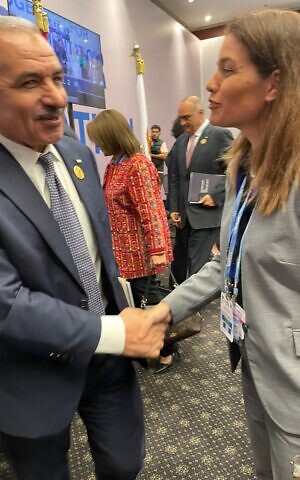 At last year’s EMME session of COP27 in Glasgow, Scotland, Fatima Druwech, a member of the Mediterranean Experts on Climate and Environmental Change, said the average annual temperature rise in the region had already reached 1.5 °C compared to pre-industrial times. This is the benchmark increase set out in the 2015 Paris Climate Agreement. The global average temperature has risen by 1.2°C compared to the pre-industrial baseline.

Dryuech noted that the regional sea ​​level rose by 15-25 centimeters (6-10 inches) between 1901 and 2018, and half of the region’s wetlands—important sinks of carbon dioxide—had disappeared. His organization published the results of the first scientific assessment of climate and environmental change in the Mediterranean basin two years ago.

At a separate COP27 meeting held at the Israel Pavilion, representatives from Israel, Bahrain, Morocco and the Masdar Institute of the UAE met to discuss regional cooperation.

Masdar, a renewable energy company owned by the UAE government, has been commissioned to build a solar farm in Jordan to supply solar power to Israel, in exchange for Israel supplying desalinated water to the Hashemite Kingdom.

a memorandum of understanding The draft was signed by Israel, Jordan and the UAE in the presence of US climate envoy John Kerry earlier on Tuesday.