Palestinian militants opened fire on Jewish worshippers, including current and prospective lawmakers, who visited Joseph’s tomb on the outskirts of the West Bank city of Nablus early Wednesday.

According to military and Palestinian reports, Israeli troops returned fire at the gunmen.

As a result of the collision, a Palestinian teenager was killed, apparently due to an explosive device he was holding exploding prematurely.

According to the Ministry of Health of the Palestinian Authority, 15-year-old Mahdi Hashash died after being seriously injured by shrapnel, not a gunshot.

The Israel Defense Forces said troops opened fire on the teenager when he planted an explosive device in the area.

Hashashi was claimed by the al-Aqsa Martyrs Brigades, a terrorist group loosely linked to PA President Mahmoud Abbas’s Fatah party, as a member.

Al-Aqsa Martyrs Brigades. Our martyr, Mahdi Muhammad Hashash, who stood up during the armed clash with the Zionist occupation forces that invaded the Balata camp, bled this morning. pic.twitter.com/3mFTnn46sW

A group of armed Palestinians in the nearby Balata refugee camp issued threats on social media on Tuesday, warning that its members would attack any Israelis who entered the tomb.

Joseph’s Tomb is located in Area A in the West Bank, which is officially under full PA control, although the Israeli military is active there. The IDF prohibits Israeli citizens from entering Area A without prior authorization. 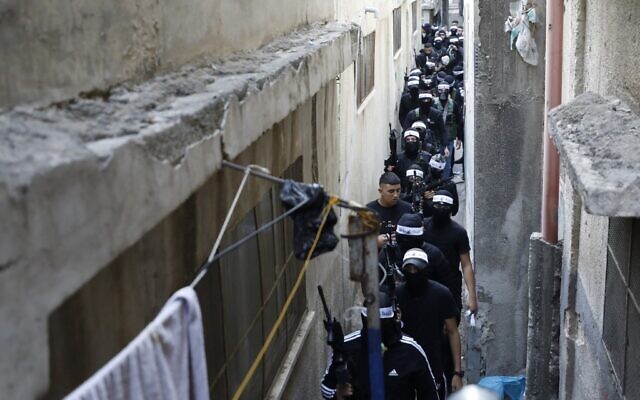 Palestinian militants from the so-called Balata Brigade rally in the Balata refugee camp near the West Bank city of Nablus on November 4, 2022. (Zain JAAFAR/AFP)

Joseph’s Tomb is revered by some as the final resting place of the biblical Joseph. Visits by Orthodox Israelis to Joseph’s Tomb occur on a monthly basis, if not more often, and almost always lead to violent clashes with Palestinian locals as the IDF enters Nablus in advance to secure the area for the arrival of hardline pilgrims.

Samaria District Council Chairman Yossi Dagan, who was also on the visit, said he expected the new government, expected to be the most right-wing ever, to “crack down on settlers” and build settlements in the West Bank.

The Israel Defense Forces said a military drone crashed in Nablus while escorting worshipers to a mausoleum. The military said no sensitive information was lost in the accident and there was no risk of intelligence being obtained from the device.

The IDF, meanwhile, continued its counter-terrorism offensive in the West Bank.

During the arrest of a terror suspect in the village of Nabi Saleh, the IDF said troops fired at Palestinians, throwing rocks and firecrackers at them. The Ministry of Health reported that one person was injured. 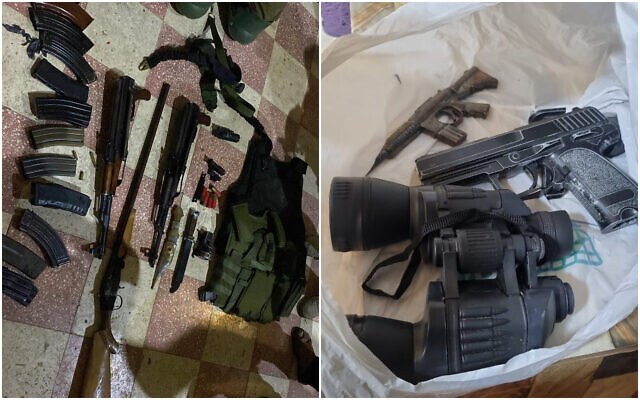 The IDF operation netted more than 2,000 arrests in almost nightly raids, but also killed more than 125 Palestinians, many, but not all, in attacks or clashes with security forces.

The anti-terrorist offensive in the West Bank began after a series of Palestinian attacks in the spring of this year, which killed 19 people.

A man on Tuesday died of his wounds during a stabbing in a Palestinian village in October.

I joined The Times of Israel after covering US and Israeli politics for Israeli media for many years.

I believe that responsible coverage of Israeli politicians means presenting a 360-degree view of their words and actions—not only conveying what is happening, but also what it means in the broader context of Israeli society and the region.

It’s hard to do because you can rarely take politicians at face value; you should go the extra mile to present the full context and try to overcome your own biases.

I’m proud of our work that tells the story of Israeli politics direct and comprehensive. I believe that Israel is stronger and more democratic when professional journalists do this difficult job well.

Your support by joining our work The Times of Israel community helps ensure we can continue to do so.